For a while now, time has not been on my side and unfortunately, I haven't had much time to blog.  Actually, I haven't really had much time to do anything to blog about but, recently, the Indiana Young Birders took a trip to Lafayette, IN to see one of the most secretive owls known - the Saw-whet.  This amazing owl has finally given me something to post about. 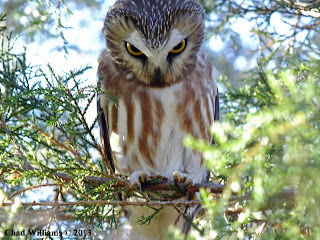 We visited the property of Dr. Delano Arvin on January 19th and were among approximately 25 other participants anxious to see these amazing birds in their natural setting.  Dr. Arvin's property has attracted these owls for many winters and this year has hosted 6 six.  Saw-whet's are cool for a lot of reasons but mostly because they are so cooperative. Standing only about 7 inches tall, Saw-whet's have little fear of humans, most likely because they rarely have encounters with us.  They are so small that they are rarely seen and for most of the year, the reside in areas that have little human activity. 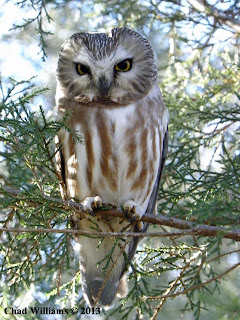 The owls on January 19th were very cooperative.  We were able to get some amazing looks at 3 and a fair look at one that was pretty well hidden - 4 in all.  Yes, that is four Saw-whets in a single morning!  The young birders were amazed at the chance to see these marvelous creatures and were even more excited that they could get virtually eye to eye without the owls making a single flinch.  The adults were equally amazed and most had not yet seen a Saw-whet owl, so this trip offered not only some terrific views but also an addition to many life lists.

To make the trip even better, participants also had a chance to see a Barred Owl and a number of other woodland birds including Northern Flicker, Hairy Woodpecker, Downy Woodpecker, Yellow-rumped Warbler and a copious number of Carolina Chickadees. I couldn't imagine a birding adventure without a chickadee.

A BIG THANKS to the Arvin family for hosting another amazing trip for the Indiana Young Birders Club!
Posted by Chad at 8:51 PM 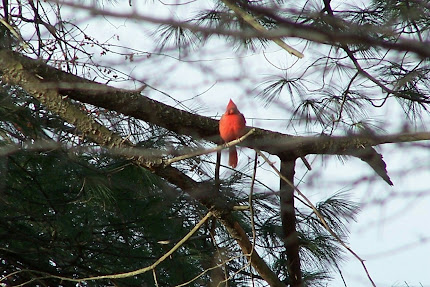